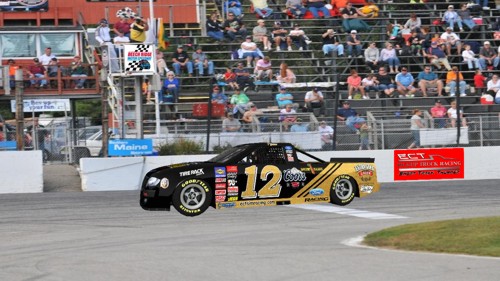 Scarborough Maine’s Beech Ridge Motor Speedway would be the venue for the final race of the New England swing. The track provided plenty of side by side action with passing inside and out. Robert Baucom rolled out a brand new Toyota from his hauler and put it on the pole for his first appearance of the season. When the green flag flew so did the sheet metal as everyone did their best to show how tough these trucks really are. Baucom would keep his truck out front and out of harm for half the race and take the points for most laps led. While he was cruising along there was a ton of hard racing back through the pack. After racing from the back of the pack several times, Jim “Tree Hugger” Windrow would finally slide the Coors ride into the lead and hold on to the checkers. Matt Corliss’ hopes of a three-pete ended in the woods as he slid off the track bringing out the final caution of the night. Cori Bibbus would finish in second right behind Windrow for the second week in a row keeping the points lead and preventing the 12 truck from making up the gap to first. Chad Barcomb put the second Windrow Motorsports truck in third for his first podium finish of the season. Get your passports in order, next week we begin the Canadian Swing at a brand new track, Scotia Speedway, eh. Thanks to all who have supported this series with some great racing and a ton of fun !