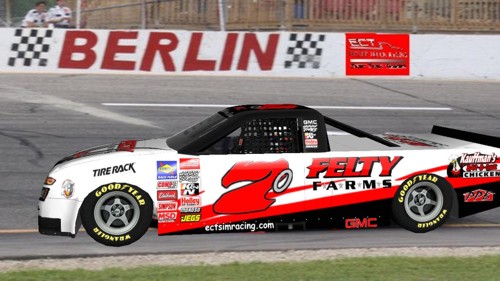 The Short Track Thunder Series returned to the United States for the rest of the season. Destination, Berlin Raceway, MI. Early in practice, it became obvious that throttle control coming off the corners would be more important than speed. All the hot shoes found that they could easily exceed the grip in the rear tires. ECT IROC found the balance early and carried it through qual to earn the pole position. When the green flag flew, so did the dust. Serious side by side racing went on from one end to the other of the field. Unfortunately the aggresion overcame the tire traction and caused nine cautions. This kept the running order constantly changing and the racing top notch. When the checkers waved, Cori Bibbus was out front for the hat trick earning maximun points. The Michigan Gang’s Ricky LaDuke would finish second and reigning Champ Jeff Crivello returned to the podium in third. Next week, the Season Finale will be at Whiteside County. If Bibbus can make the haul to Whiteside and take the green, he will lock up the Season Championship. Knowing some of his fellow competitor’s ambitions, he should increase security around his shop and hauler this week.