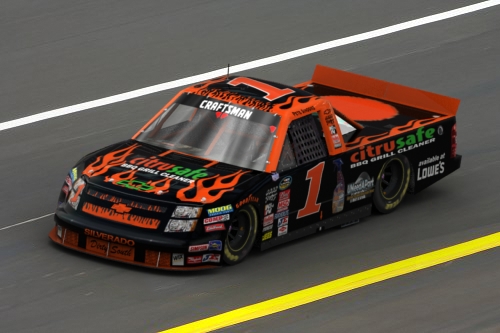 Tonight Those Bad Boys of ECT’s Truck Series were at Coca Cola Superspeedway. ECT-Mike Scott took the pole with a speed of 192.943. The race started off with some close racing then it HAPPENED !! ECT-Da Bandit hits the apron going into turns 3-4 and collects a few trucks in the mayham. After the track crew cleaned up the mess the boys went rite back to there normal high speeds door to door !!! The race just seen 2 more small cautions for a a total of 7 laps.. With Sindone running up front all race it seemed he had the truck to beat. Then a bad pit stop dropped him back with about 25 to go trying to run down ECT Blaster and BSR Brianfade who with great pits stops had put a 20 second lead on Sindone, Then when all else failed the Yellow came out for the last time with ECT Redchevys engine blowing. This gave Sindone the chance to get up to the leader and a fighting chance to get to the front. When the green dropped Sindone charged to the front with Oldman pushing him. This would be the sameway till that Final lap when BSR Brianfade and Oldman played Cat & Mouse and came together coming down the main shoot and putting them both into the inside wall killing there chances for a win. This gave Sindone the Green light to haul ass to the Line for the Win !!! Great Race by All !!! Sindone now extents his Points lead by 126 points over ECT-Quack.. See you all next week at Talladgea Superspeedway !!!!!!