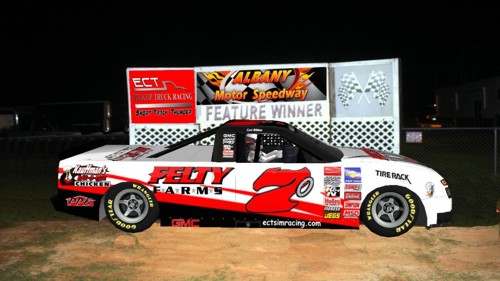 Georgia’s Albany Motor Speedway was the site of race 4 of ECT’s Pickup Truck Series. Once on track it became obvious there was zero forward bite. Throttle control up off the turns would be the key to winning. Enter reigning champ ECT IROC and his smooth style to steal yet another pole. With everyone spiining out of the turns, Bibbus kept it out front and safe for the first half of the race giving up the lead to pit at the halfway mark. Mass.’ Danny Savory would inherit the lead only to fall victim to the track conditions and spin out. Next up would be Bruce Phalin who would stay out front only long enough to score the bonus points and hit the pits. Normal front runners Brian Schilling and Matt Corliss were having bad nights. At times it seemed they were competing to see who could cause more damage to their truck. Cori would regain the lead and never look back, securing the bonus for most laps led as well as the “Hat Trick”, winning his third race in a row. The race would go green with 17 laps left to go. Phalin and Savory would race hard and clean to the checkers. Savory kept the pressure on in hopes of Phalin making a big mistake. Phalin kept his truck under him and Danny didn’t move him out of the way allowing them to finish second and third respecfully. Phalin slipped into second place in the standings behind Bibbus while Schilling. after a second bad night, fell back into the clutches of Bill Kring. Join us next week in Huntsville Alabama for more fun racing.