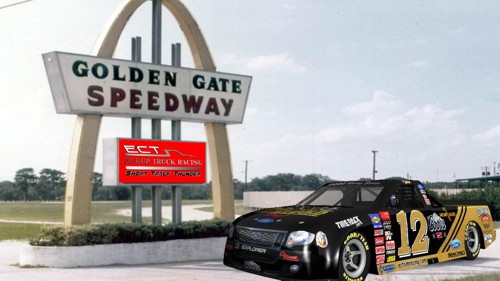 Tampa FL put out the welcome mat for the ECT Pickup Series at historic Golden Gate Speedway. Cori B would lead off from the pole with fellow speedster Brian Schilling on his tail as usual, slowly pulling away from the field, making it look like it would be a two truck challenge. Unfortunately, a loose nut in the 70 car’s transmission would cause a loss of fourth gear during an early caution. IROC would motor on until the excessive rpm’s would hand greanade his engine and with it his hopes of a decent points night. Brian Schilling would then put the Freaky Fast Jimmy Johns truck out front leading a race high 49 laps. A late race caution would bunch up the field for a ten lap shootout that promised to bend a little sheet metal. With five laps to go, tree hugger/owner/driver of the Windrow Motorsports ride executed a perfect “bump-n-run” and got inside the #4 of Schilling. Paint was traded the entire front stretch but Windrow held the inside going into one and came out with the lead. Schilling would push too hard trying to regain the lead and spin with two to go and collecting Bill Kring’s #32. When the dust settled at start/finish Kring would be sitting in second with last season’s champ Jeff Crivello in third. Brian would limp home in fourth. Storming off to his hauler, he declined our request for an interview. With his second place finish last week and the win tonight, Jim Windrow takes over the early points lead. Next week we’ll be in North Carolina at Wake County Speedway for some fun on it’s 1/4 mile asphault surface. Put on your big girl panties and join us.