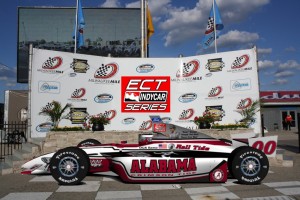 The Indycar Series haulers rolled into the Wisconsinn State Fairgrounds for this weeks show. The flat Milwaukee Mile would prove a new challenge to the series drivers. OGR Bama brought his Crimson Tide ride into Badger country and proved to be the class of the field nailing down the pole. From the drop of the green, Bama steadily pulled out a comfortable lead until green flag stops began. The “chicane style” pit entrance would prove treacherous as points leader OGR Ellie would bring out the nights only caution attempting to access his pits. The caution would catch several drivers a lap down. On the restart, OGR Bama would again take the lead but a reported set of “bad tires” prevented him from getting away. SEC rival from Florida, Bruce Phalin would run him down and take the lead for the next 32 laps. Following final green flag pit stops with his “tire problem” remedied, OGR Bama put on a driving exhibition as he would chase down Phalin and resume the lead to the checkers for a total of 102 laps lead. ECT Q would bring the Puma Chevy home in second with OGR Ellie recovering from his early troubles and finishing third. Next week the high banks of Nashville will offer up new challenges for those brave souls who make the field.