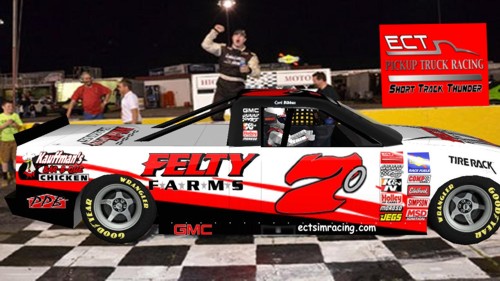 Short Track Thunder made it’s first ever trip to Asheville, NC. If anyone knew what to expect, they may have stayed home. This flat, abrasive, track sent everyone home with damage yet the entire field finished the race. It certanly was not the welcome return expected by previous season drivers Bobby “Crome Dome” Ambroceo and the Michigan Gang’s leader, Matt “Lefty” Corliss. Both would suffer multiple incidents. PA’s ECT IROC would earn his third pole in as many weeks and prove that out front was the safest place to be. Bibbus would only give up the lead for pit stops which kept him out of most of the carnage When the checkers flew and the dust settled, it would be Bibbus atop the podium for his second win of the season. Brian Schilling would overcome the loss of a lap early when he ended up on his roof, to finish in second follwed by the LGBT rep Jim Windrow in third. With his bonus points for leading the most laps, IROC has moved into first place in series points. Following a busy week of rebuilding trucks, the series heads to a more familiar venue at the high banks of Wall Speedway. If you own a pair, come out and join the fun.