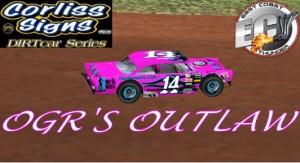 Thursday Night was a cool night, but the action on the track was hot. First up, the 55’s put on a great show as they showed you can run 3 and 4 wide at The DIRT Track. OGR’s Brian Schilling juped out to an early lead and never looked back winning the first of three features. Next up the 358 Modifieds took to the track for there feature. This one was a dandy as Chad Barcomb led 18 laps before getting into trouble with another car. That left Matt Corliss to take the top spot only to be overtaken by Jim Windrow, who would then go one to capture the Modified feature. The last race of the night and season saw Bill Kring start from the pole. Kring had a great run leading 27 laps before making a mistake on a restart. Corliss slid by to take the lead and lead the remaining 18 for the checkered flag to end the season. Schilling was 2nd, Bruce Phalin 3rd, Newbee Ricky Laduke had a great run in 4th, and Kring ended up 5th. All though the season ended, the Champions were crowned and the celebrating began. Florida native Bruce Phalin in the #13 machine grabbed the points championship in the 55’s and the 358 Modifieds. Phil Loedeman from Kalamazoo Michigan took the title in the Late Models. Congrats to all the drivers for another great DIRTcar season. Be sure to watch the forums for news on the upcoming season 3.