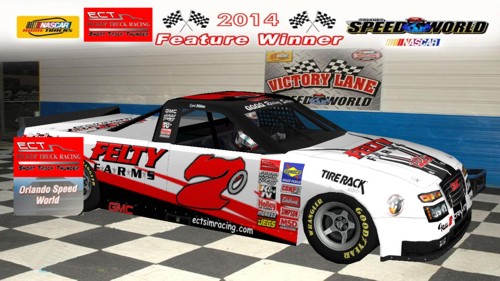 On the wrong side of the tracks from Disney World lays Orlando Speedworld, this weeks host for the STT Pick-ups. This track was last resurfaced the year Pete Sindone was born, which I believe, is the same year Rome burned while Nero fiddled. The complete lack of traction required smooth car control and reigning champ, Cori Bibbus was up for the challenge knocking off his second pole position in a row. At the drop of the green, IROC would ease out to a comfortable gap over NY’s Brian Schilling in second and lead every green lap. Past Champ, Jeff Crivello found out that the surface was old but the walls were as good as new. He would total out his truck early and wander up in the stands to watch the race to the end. With the first two spots all but decided, the only racing was for third place. MI’s Bill Kring and Florida’s Bruce Phalin swapped the spot back and forth all night without ever hitting each other. Late in the race, Phalin would losse concentration and run his truck up into the marbles allowing Kring to spped by and claim the final podium position. Sweeping all the points puts IROC soley in first place heading into week three at Ocala. Hope to see you all there.