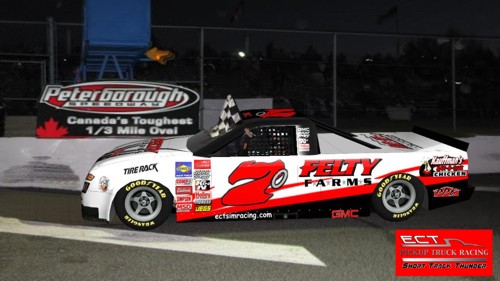 After resolving his imigration issues, Cori Bibbus rolled accross the border and into Peterborough Speedway with the Felty Farms hauler. In a pre-race interview, he promised a win to make up for the lost race the week previous. He backed up his claim with a scorching qual lap to set the pole. A smooth and steady style kept IROC out front for most of the race. Those chasing him, found that overdriving this tricky little track, would result in a trip to the infield grass. At lap 20, series regular Bruce Phalin had an engine let go. Following inspection, it was found that his fuel cell had been spiked with Vermont Maple Syrup. Local authorities are checking with the border patrol checking incoming inventories on certain competitors haulers. Possible charges may be pending. Some great racing went on behind Bibbus, but he kept his GMC out front for 90 laps and the win for maximum points. A late race caution set up a shootout at the end but Jim “The Tree Hugger” Windrow had nothing for Bibbus and would finish in second. Brian Schilling would take the final podium position and with the bonus points for leading a lap, he would take over the points lead. With three races to go, the top five are separated by a mere 22 points. Next week we finish off the Canadian swing at Capital City Speedway. Don’t miss out on the fun, come join us.