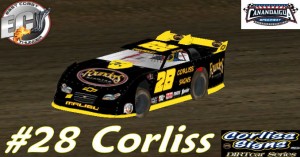 Week #4 of the DIRTcar Series saw some great racing  as #28 Matt Corliss would lead 29 of the 30 laps of the 55’s feature only to see #13 Bruce Phalin pull off an awesome move to get by on the last lap and beat Corliss to the line. #12 Jim Windrow was 3rd followed by #2 OGR’s Outlaw in 4th and #32 Bill Kring rounding out the top 5. Next up were the 358 Modifieds. Bill Kring would jump out to an early lead and hold off challenges of Windrow and Corliss to claim his first ever checkered flag at ECT. Windrow was 2nd, Phalin 3rd, Corliss 4th and Outlaw 5th. Finally the Outlaw Dirt Late Models had a 50 lap event. Kring would draw the pole and lead the first 12 laps until one slip up costed him. Corliss jumped on the mistake by Kring and led the last 37 to claim the checkers. Windrow was 2nd, Outlaw 3rd, 4th was Phalin and Kring 5th. Three different winners again proves this series to be one of the best with some great racing by all. Join us next Thursday as the Series continues there New York swing as the roll into Fonda Speedway.