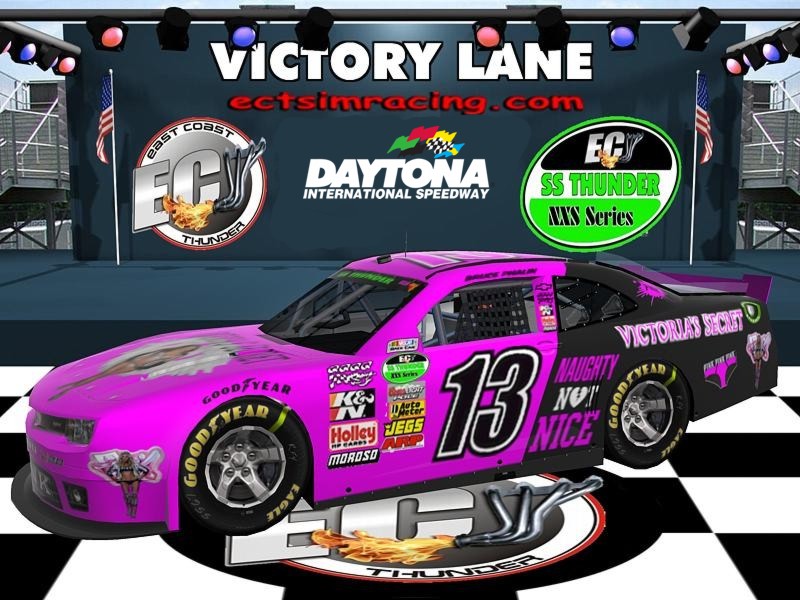 A full moon over Daytona did not bode well for the SS Thunder gang. The heightened aggression led to five cautions in the first half of the race. But the clouds came out and the moon passed behind them and the race went green to the end. With needed green flag stops with over twenty laps to go, everyone was on the hairy edge of their fuel window. Unfortunately Don L. ended up in the lead, and he would fall half a lap short at the end because he was poking the hole in the air. The Conga line of clutching drivers followed Don until the end. With five to go, the high lined formed up and Bernie with Bob on his tail jumped up and rode the wave to the front. Diesel left room for Q to also jump up and follow the new leaders. When Bernie & Bob cleared Don, they dropped down to the low line. Q, with Diesel and Madman in tow stayed high and worked his way to the lead. B & B fought back a few times but when the checkers flew it was Q, John Forgione and Marc Paglia the top three. With the bonus points for leading the most laps, ECT Q cut into Bernie’s points lead but with only two races left the Championship is Mobbs’ to lose. Since he hasn’t put a tire off all season, you can expect him to be cashing the big check at the banquet. Next week it’s Sweet Home Alabama as Tally will play host. Hope to see you there !