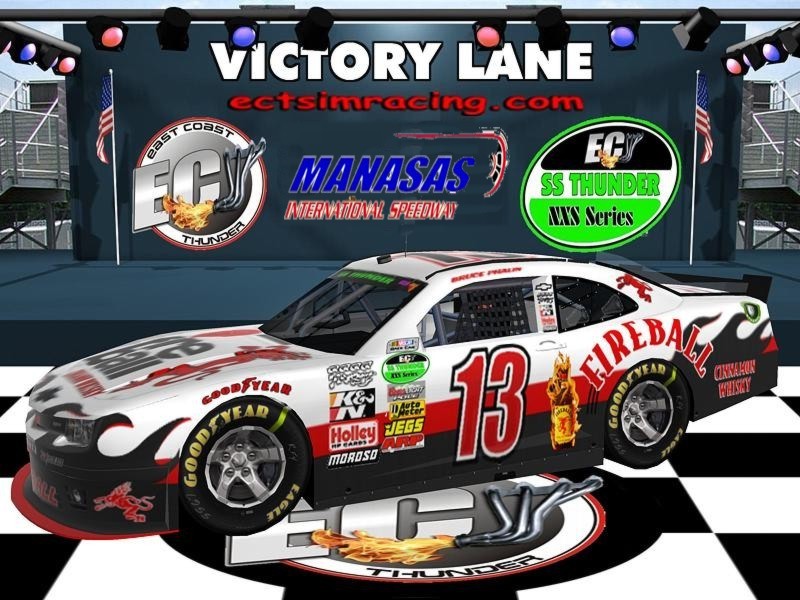 Whoever said “Virginia is for Lovers” didn’t know the SS Thunder gang. Points leader Bernie Mobbs would lay down the fastest lap in qualifying to start on the pole. At the drop of the green with his B&B Racing teammate in tow they would pull out in front. Hillbilly Racing’s McClure and Scott would form up on the outside and draw a crowd with them. The added help would push them to the lead just as disaster struck. “The Big One” came early and collected the entire field with the exception of the two hillbillies. BDazzler and BobD were seen walking back to the pits carrying the only surviving parts of their cars, the steering wheels. The sound in the pits of hammers and saws overpowered those of the engines. Bear Bond covered up most of the cars sponsors. When the green flew, Chuck and Mike’s clean cars would set the pace. ECT Q and ECT DaBandit managed to hang in their draft as the rest of the field sorted out their positions based on damage. It looked like an easy win for ECT Redchevy but fate had yet to play it’s hand. The second and final caution would fly when McClure’s engine let go taking out his teammate and the cars following. Now everyone had damage. At the green, positions would again be decided by amount of damage. Mike Scott had the strongest car and earned the bonus points for most laps led. Final green flag stops would again shuffle up the field. Tim Morse would spin out Rob Neises going into the pits with
Bruce Phalin and lapper Bernie Mobbs safely pitting out together. Mike Scott would come out in the lead but they ran him down. The Hillbilly racing radios lit up with a rare miscalculation of fuel mileage and Swat would hand over the lead to Q in an effort to save fuel. But the error was too great even for the “Master of Fuel” and he had to pit for a splash of gas coming out at the tail end of the lead lap in third. ECT Q would nurse his crippled car to the checkers with Bandit recovering from his spin to finish a distant second. Mobbs held on for a fourth place finish and left still holding the points lead. With three races left, the top three are separated by a mere eight points. Next week we’re off to Indianapolis for round twelve. Join us for what is always a great event !!!!!!!!!!!!!!