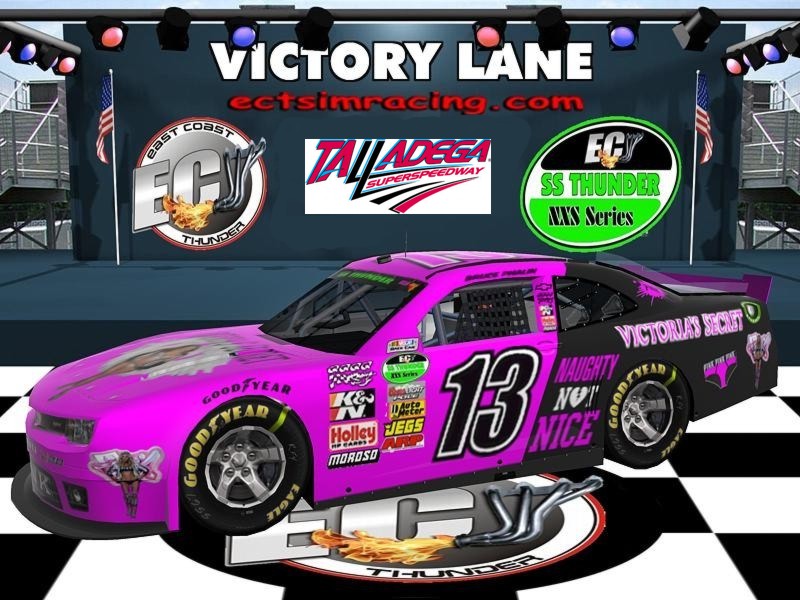 After last weeks FULL MOON FIASCO, this race was what we’ve come to expect from the SS Thunder Gang. With one lone caution for debris, it was hard fought racing all night. At ten laps to go and the top eight cars in a pack, green flag stops should sort it out. There were three different strategies but when it was done all eight cars were still packed up and ready for a wild finish. Coming to the three to go, DaBandit made his move from the rear of the pack. First three wide high where he got a run and passed the inside line, then going into turn four he took ECT Q with him and dove to the bottom passing the leaders. With Q, Bernie Mobbs and Bob D on his tail, he held the lead until turn four coming to the one to go. He clipped the apron and Q couldn’t lift fast enough hitting him and spinning him to the infield grass. This allowed the outside line of Motor City Madman, Diesel and DMAR to shoot to the lead at the white flag. Bernie and Bob had the inside while Q and Poreboy ran the outside. Paint was swapped down the backstretch but when the leaders stayed high, Q got a run on them and passed BM. Q would pull the same move as Bandit had and dove to the bottom in turn four with Bernie, Bob and Roger pushing him. Body slams were exchanged from turn four to the finish line between Marc and Q but when the flag waved it was ECT Q and the Victoria’s Secret Chevy in victory lane for the second week in a row and third time of the season. Bernie Mobbs would finish second and Marc Paglia third. By finishing just behind Q, Bernie minimized the points loss and all he needs to do is take the green flag under the lights in Daytona to lock up the Championship. Join us next week for the Season Finale.