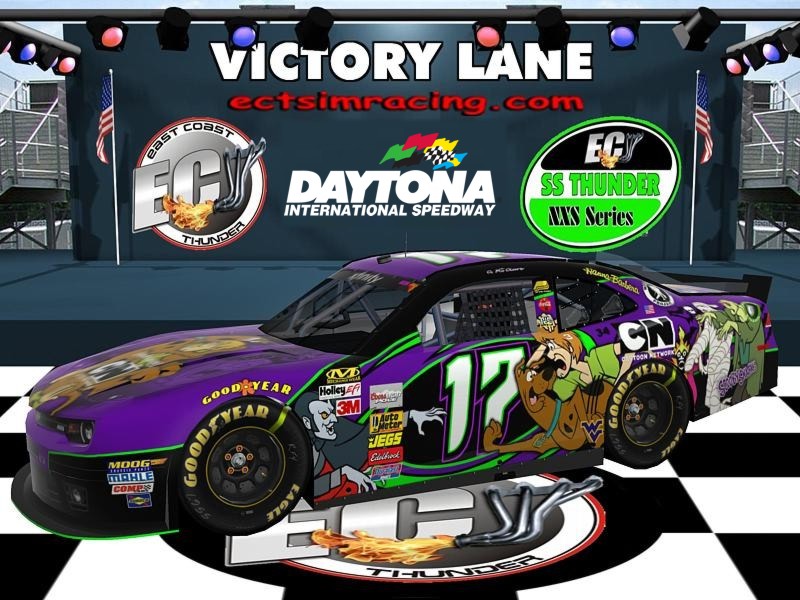 Three drivers were “in the hunt” for the Season 14 Title. Chuck McClure, in third, needed to win the race, lead the most laps, and have both of his competitors suffer some problems. Bruce Phalin needed to finish four places in front of Mobbs and no more than four spots behind McClure. Bernie Mobbs would only need to keep the others “in view” and the trophy was his. Redchevy would win the pole and at the green line up on the low line with Hillbilly Racing teammate Scott and “his yankee brother from a different mother”, Forgione. B&B Racing’s Dixon and Mobbs settled in behind them. ECT Q started in the rear and spent the first half of the race fighting to get to the front. He continually was hung out on the outside and never moved closer than fifth. On lap 38 he clipped BobD causing a huge wreck. When the dust settled he was on his roof sitting on the apron. By the time the wreckers put him back on his wheels and in the pits, he would lose two laps on the field dashing all hope for a championship. At the green, the Conga line again formed with Chuck wearing the straw hat covered in fruit leading. On lap 54, Bernie Mobbs’ dreams went up in smoke when a piston blew a hole in his engine. Now all Chevy needed to do was stay out of trouble. With ten to go, final green flag stops were in order for the leaders. Entering the pits, John would overrun Mike setting off a melee that would collect the leader. BobD would come out in the lead but alone. Redchevy would recover and with FDiesel glued to his bumper, go after Dixon. They would pass him up and lead the small pack to the checkers. McClure would claim the victory of the race along with the right to claim the “Big Trophy” in Vegas. Join us next season for what I hope will be a close race like this one.