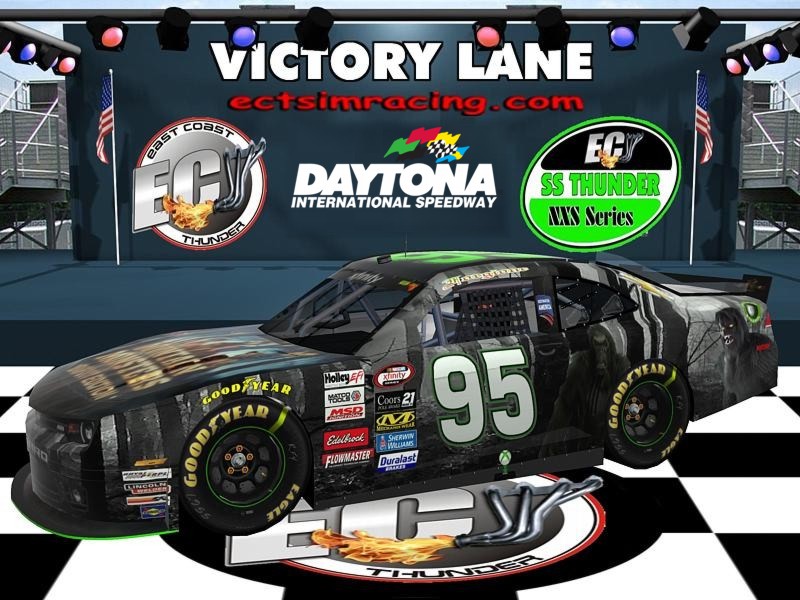 Florida’s beautiful beaches played host to the drivers and crews of the SS Thunder Series in week two. Reigning Champ Bernie Mobbs would start from the pole after setting fast time in quals, but would get wrecked early and have to live with the damage for the rest of the race. Two time Champ ECT Redchevy would lead the most laps on the night but also suffer bad fortune at the end. In the midst of late race green flag stops, ECT Bernie’s engine let go oiling down the track and trapping half the field a lap down. Following yellow pit stops the lucky dog and six “wave arounds” bunched the field back up for a six lap shootout. At the green FDiesel would dive to the bottom taking buddies Chuck McClure and Mike Scott with him. When they got to the lead, John and Chuck hung SWAT out to dry and he fell to the rear of the pack. At the white flag, “The Big One” happened taking out McClure in second and most of the pack behind him. Motor City Madman, Mike Scott and ECT Q would clear the wreck and make it a four car dash for the checkers. Marc would take up position on John’s bumper. Scott made a run on the pair and got blocked to the apron and slid up into the wall. Q would clear Mike and get a run going into turn four. Motor would block him to the apron as well causing him to slide up in front of Mike who collected him. He would take third in a 200 mph slide sideways at the checkers. NJ’s own, John Forgione would roll his Chevy into victory lane for the second week in a row. Diesel holds a commanding lead in the points but it’s a long season ahead. Next week we are headed to Manassas, VA. The fun just keeps coming.