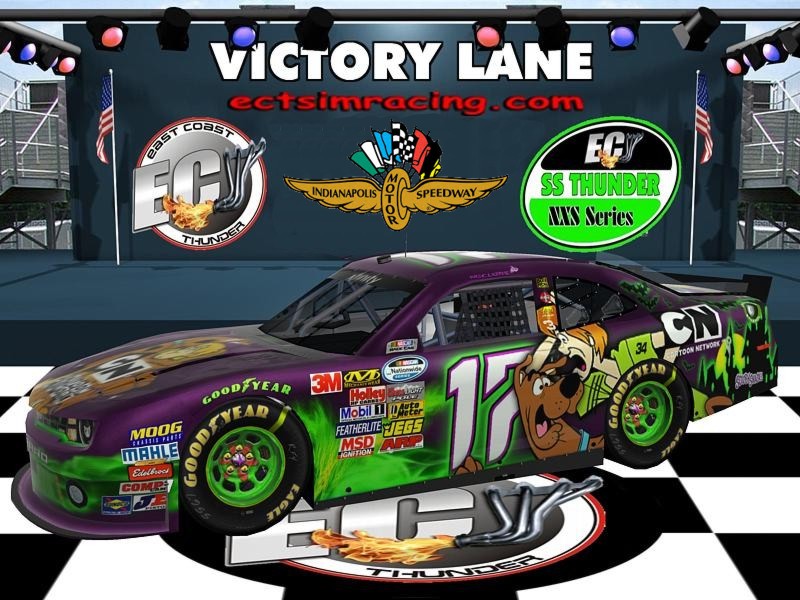 The peaceful, spring, Indiana evening was shattered by the roaring engines of the SS Thunder Series. Hillbilly Racing’s patriarch, Mike Scott, would set fastest time in qual (twice) and take the green from the pole. It wouldn’t take long before another sound could be heard, that of crushing sheet metal. The entire field would show signs of contact before the race was through. Bernie Mobbs would suffer his wreck early, but would resort back to his championship winning ways. With excellent pit stops, he worked his way to the lead. Holding the inside line allowed him to score the bonus points for most laps led. With thirteen laps to go, teammates Redchevy and Swat set out to prove they could get it done on the outside. With DaBandit and some helpers in tow, they slowly gained ground on the leaders. When the two cleared the leader, they abandoned their help and dropped to the bottom with the lead. A caution with six to go would split the teammates. The radios were a buzz as deals were made. The leader took the outside on the restart knowing his friend would let him down on the green. A three lap shootout at the green put all the drivers fighting for the best points they could get. Coming to the white flag, Motor City Madman dove onto the pit entrance and pulled alongside Mike Scott. With the pit wall looming, he had nowhere to go and body slammed Scott into the outside wall taking out most of the field and earning himself a visit to the series trailer. When the official results were posted, Redchevy would head to victory lane for the second week in a row with DMAR and -ECT-Bernie rounding out the top three. Join us next week under the lights at Daytona where you can actually see the sparks fly.