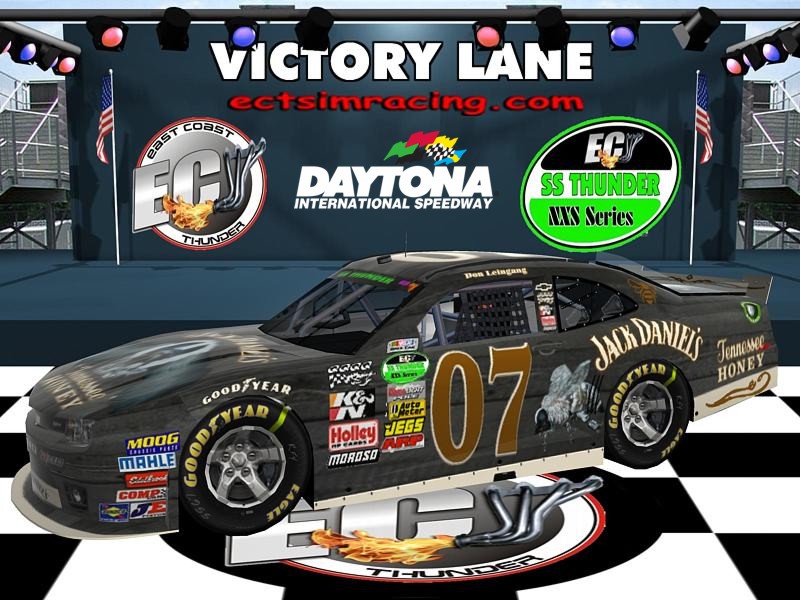 Rain in paradise would wash out qualifying with Paul McCollum drawing the pole out of the hat. Mike Scott and his Hillbilly Racing teammate and their illegitimate cousin “Jersey John” would take the lead and set the pace. Sparks would fly early splitting up the pack but no caution would come out. The lead pack of seven would walk away from the field. Scott would spin entering the pits under green taking out the lead pack. This left three small packs of two and Swat leading the following large pack. With the speed of the larger group, they eventually “Pac-Manned” up the small groups and brought the field back together. The only caution of the night fell at the halfway point and set the fuel saver kings hearts a flutter. Don L. would take the lead on the green and hold it until final green flag stops earning the bonus points for most laps led. With ten to go the leaders had run down the fuel savers, as they hit the pits for a final green flag stop. Dmar would be the only car in the fuel saver group to pit for a splash and came out all alone in the lead. At six to go, the lead pack blew past Dmar on the inside just as the Hillbillies caught up. Swat and crew would jump to the high side and begin to push Martin back to the front. Don L. jumped to the second lane and rode their momentum to the lead. Don and Rick would dive to the bottom after clearing the leader hanging the Hillbillies out to dry (note to self). The entire field from third on back would wreck at the checkers with cars finishing while flipping, spinning and flying. Don L. would head to Victory Lane for the first time this season with Dmar and Bernie rounding out the top three. Bernie Mobbs and Chuck McClure are back in a tie for the points lead. With their consistency, the rest of the field is fighting for third where BobD and DaBandit are tied thirty two points off the lead. Join us next week at the “home of the big three”, High Banked Michigan for another thriller.