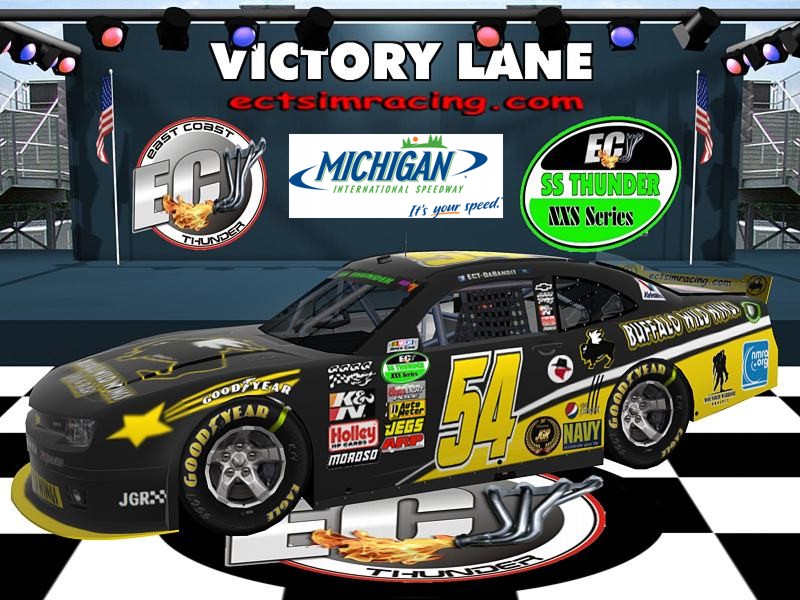 Running so few races anymore, his hauler driver got lost on the way to the track. Arriving late was ECT’s own, Pete “The Outlaw” Sindone. Series officials reset qual to let the “Old Fart” in. Points leader (tied), Bernie Mobbs would set fastest time in qual (twice). From the drop of the green, Bernie would set the pace with his B&B Racing teammate, Bob D on his wing and earn the “Most Laps Lead” bonus early. Sindone followed the leaders in third. At the first green flag stops, Pete would have to lock up his brakes to avoid the rapidly slowing B&B Team. He slid up the track and was collected by the field at full speed. Sindone was seen wandering the pits afterward trying to get directions back home. Smooth green flag racing would rule until -ECT-Bernie’s motor would blow up ruining his hopes of leaving the night with the points lead. With final green flag stops beginning, Chuck McClure, Rob Neises and Fred Morrel would stay out an extra lap giving them a clear pit lane. Chuck would come out way ahead with DaBandit picking up the rest of the field in second. Neises would blow past the leader and dive to the bottom. With twenty to go and -ECT-REDCHEVY as his wingman, it was Rob’s race to lose. Dmar and Q were in line on McClure’s bumper waiting for the laps to run down. At two to go Martin would make his move to the high side. Phalin would follow with the pack going high to support. But Q kept an eye in his mirror and when the pack dove back to the bottom, he hung out Dmar to go low and take third. DaBandit would roll his Buffalo Wild Wings Chevy into Victory Lane for the first time this season. With his second place finish and closest competitor already in the hauler, Hillbilly Racing’s Chuck McClure would end the night in sole possession of the points lead. Join us next week under the lights at Talladega.