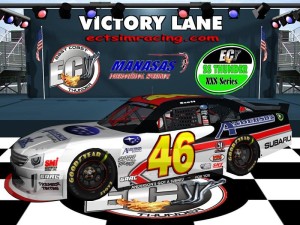 As the laps wore down, Hillbilly Racing held a comfortable lead as expected. But the upstarts, this time Q, Bandit and DMAR were packed up and running them down. They caught them with four to go but some serious blocking from a lapped car broke them up and left Q with no help past the Hillbillies. Mike Scott earned his second win of the season followed by Chuck McClure and Q. Next week look for the Pig on a spit rather than blocking out the leaders.