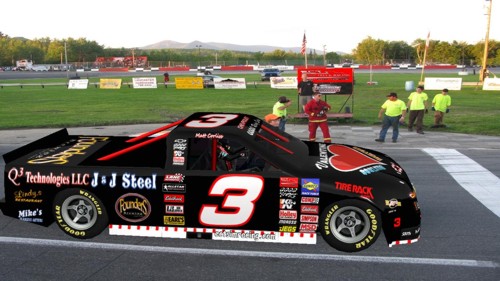 When the drivers of Short Track Thunder unloaded at Riverside Speedway, they found a track surface with more grip than weeks previous. Combined with some banking, they found the track to be easier to drive. Taking advantage of good conditions, Ricky “Big Poop” LaDuke would set fast time to earn his first pole of the season. When the green flag flew, the improved handling brought with it a higher level of aggression. With the yellow flags flying, the running order was in a constant state of change. This made for some great racing and some fun for all. When the checkered flag was shown, Matt Corliss was out front for his second win in as many weeks.The Tree Hugger, Jim Windrow, would return to the podium in second but only gain 3 points as Cori Bibbus would bring it home in third to maintain his points lead. The trucks head up to Maine next week as Beech Ridge plays host to the series.