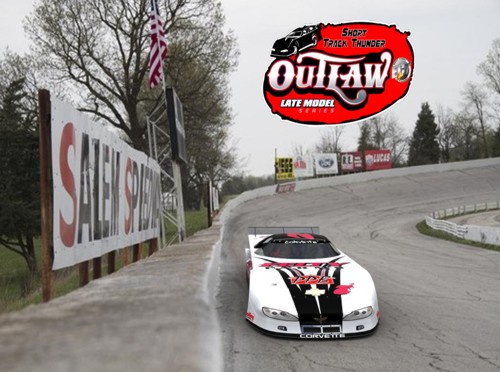 Indiana’s Salem Speedway would prove to be an unwelcoming host to the Outlaw Late Model Series. By the end of practice, the pile of bent sheetmetal in the pits was a recycler’s dream. Ontario’s Matt Smith would take the green from the pole but give up the lead to ECT IROC by turn 1. The slick surface at the transition from corner to straights would cause a rash of cautions that would involve every car in the field at least once. Polesitter Smith would impale himself in the outside fence at the 1/4 mark. By the halfway point things settled out for some long green flag runs lead by perrenial front runner Cori Bibbus. A late race caution bunched up the field, but IROC was able to hold off Florida’s Bruce Phalin and Danny “Seriously” Savory for his fourth win of the season. Points leader Jeff Crivello limped his mangled racecar into fourth place and gave up enough of his points lead to send the Championship to the final race. The Season Finale is next week in Badger Country at Wisconsin’s Madison International Speedway. Hope to see you there.