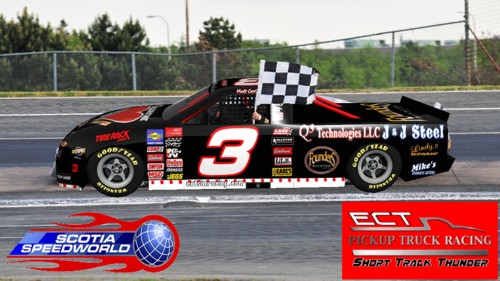 The drivers of Short Track Thunder had to brave a twelve hour ferry ride and a border crossing to reach Nova Scotia for the first race of the Canadian swing. Scotia Speedworld’s wide flat turns would reward their efforts with some great racing. The Michigan Missle, Matt Corliss, would rebound from last week’s misfortunes with a pole position. Corliss would lead from the green and only give up the lead to Jim Windrow when he would pit for tires. Hard racing from the front to the rear of the pack continued throughout the race, interupted only occasionally by a self spin. The final caution would set up a three lap shootout with Corliss sandwiched between Windrow Motorsports teamates. At the drop of the green, Matt pulled off a patented “Windrow” on the master taking the inside line going into turn one. Corliss and Windrow would bang doors all the way down the backstretch with the Tree-Hugger losing out going into turn three. Teamate Chad Barcomb would give him another slam as he slid past into second. More than paint was swapped following the race based on conversations overheard coming from the Windrow Motorsports’ team hauler. With points leader Cori Bibbus absent for family obligations, Bill Kring would jump both Bibbus and Schilling to take the points lead and the gap between the top five was narrowed signifcantly. Next week Petersborough Ontario will host race two of the Canadian run. Until then, enjoy some Molson and the hospitality of our neighbors to the North.