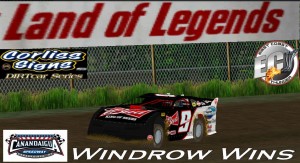 12/6/12. The DIRTcar Series were in action Thursday night at  Canandaigua Speedway for race #8 on the schedule. First up were “The Legends 55’s”. Bruce Phalin would draw the pole. Phalin held on to the top spot for most of the race. A late race caution set up a 3 lap shootout and point leader Matt Corliss would sneak by at the finish to grab the victory in the 25 lap feature. Next up were the “Mud Bus” Modifieds. Curtis “The Tiger” Towne would draw the top spot for the 40 lap event. Towne held on strong for the first half of the race , only to give the led to Corliss, who would wind up winning his 2nd race of the night. The Late Models rolled off next for there 50 lap A main. OGR’s Brian Schilling from New York would led the way leading the first 11 laps, until giving up the lead to Jim Windrow from the great state of Vermont. Windrow “The Legend” held off stressing challenges from Corliss to go on a win the Late Model event.