Opening night of a new series saw the Outlaw Super Late Models head to Michigan to the home of Johnny Benson, the Berlin Raceway. Brian Schilling was the one to beat, when just pass half way he found himself in a horrific crash off the end of the back stretch. He was air lifted to Sparrow Hospital in Grand Rapids. Updates on his condition were not available at the time of this write up. Meanwhile after the long red flag, racing resumed as Matt Corliss gathered the lead through pit stops and went on to win the 1st race of the new series. 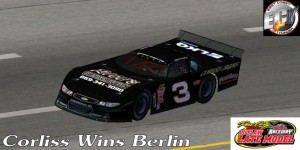