Brian Schilling avoided some late race mayheim to pull out the victory in the 80 Lap Late Model feature. With a 5 lap shootout, Danny Savary who led 69 0f the 80 laps took the green flag, as the field rushed into turn one Savary got loose, and then 2nd place Matt Corliss and 3rd place Bobby Ambroceo  played bumper tag all the way to Savary’s left rear quarter panel taking out the top 3 in the field. Savary was unable to finish, as Corliss and Ambroceo limped home in the back of the field. Neither of the competitors could be found after the race for comments. Corliss led 31 of the 50 lapd in the Modifieds to take his 2nd in a row. 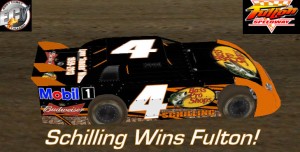