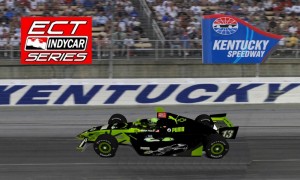 The Indycar Circus rolled into the Bluegrass State for this weeks show. West Virginia’s own Chuck McClure took advantage of the short tow to get in a little extra practice which he used to win the pole. Race speeds were close as there were a total of 22 lead changes among eight drivers. McClure though, would edge out Vermont’s Jim Windrow for most laps led with 27. The carnage from two cautions would split the field by those with and without damage. The four leaders would pack up and run together until different strategies for green flag pitstops would separate them temporarily but when they were over all four were back together again with 20 laps to go. Florida’s Bruce Phalin would start picking off spots. With less than ten to go he would slip past McClure after a slight bobble and run to the checkers for his first win of the season. McClure would finish second with Windrow rounding out the podium in third. Series points leader OGR Ellie came home in fourth to hold on to the points lead. Next week Milwaukee will play host to the series. Come join the fun !