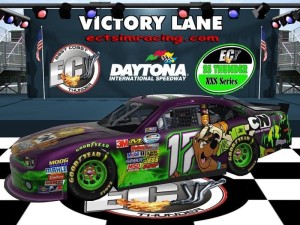 The SS Thunder Season Opener at Daytona was a great race with only one caution on the night. This brought fuel strategy into the mix and who better than Hillbilly Racing’s Chuck McClure to put on a school. The engine was sputtering as he took the checkers without enough fuel for a victory burn-out. Unfortunately, the reigning Champion will not be able to run the entire season but the promoters wish him the best as he strives to further his education. This leaves the Championship Race up for grabs. Who has what it takes??????????