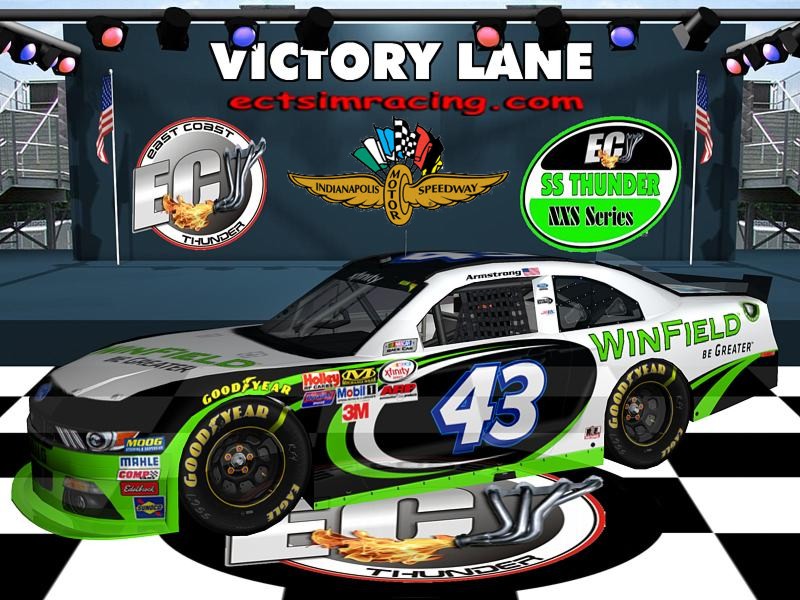 Indy Banked would play host this week to the points war that the SS Thunder Series has become. Chuck McClure set the pole and with teammate, Mike Scott, the early race pace until caution flew. BobD and Bernie Mobbs would take over on the green and hold on until green flag stops. Once pit stops cycled through, ECT BobD was back in the lead but with ECT Q on his bumper as Bernie had spun exiting the pits under green. Hillbilly Racing took to the outside line and pushed hard to takeover the top spot. Unfortunately Swat pushed a little too hard and spun Redchevy causing him to barrel roll down the track and into the inside catch fence. The wreck would take out Motor City Madman as well but bunch up the field for what should have been the last pit stops. Richard Martin would get out of the pits first followed by B&B Racing. A late race caution set up a three lap shootout for the win. At the drop of the green Bernie & Bob jumped to the outside to overpower Richard but Fred and Bruce slipped in behind him preventing their pass and hanging them out to dry as more cars joined the inside. Fredo and Q would push DMAR to his first win of the season and top off the front three. Martin also earned the bonus points for leading the most laps. With the results official, Mobbs and Phalin are in a tie for the points lead with McClure only 15 points back. With two races to go it’s still a three way battle for the Championship. Join us next week in the Irish Hills of Michigan for another great event !!!!!!!!!!!!!