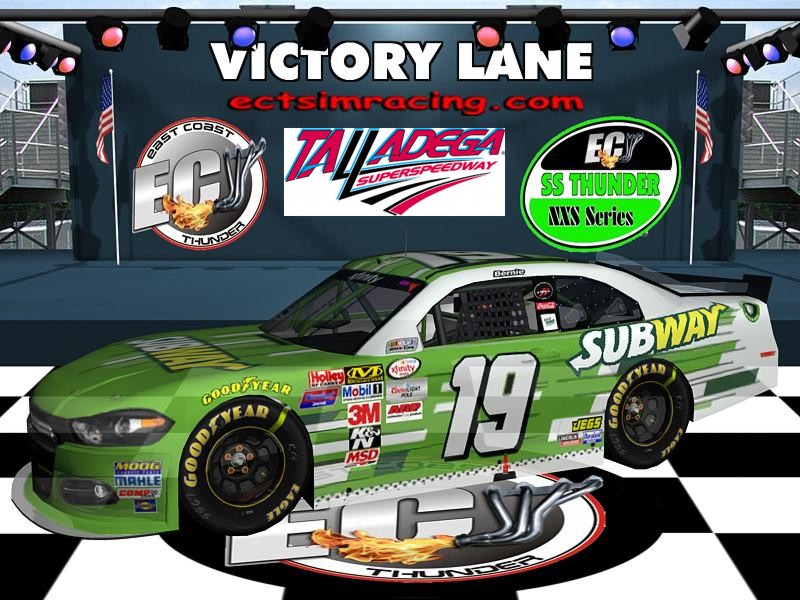 The lights were on at Talladega for Race 7 of the SS Thunder Series. -ECT-Bernie rolled into the paddock with fresh paint on his hauler and a bunch of “fresh” cash and equipment. Wasting no time he put his new car on the pole and proceeded to earn the most laps led bonus. With an entirely green flag race, pit stops were going to be the deciding factor, or would they? With thirteen to go, Leader Bernie Mobbs, his lap down teammate BobD and Bruce Phalin would hit the pits for the last time. Smooth stops brought them back out together in a dash for the cash.On the next lap. new leader Chuck McClure, Crivello and Bevins would make their final stop. Crivello rolled the dice and took only one can of fuel. He came out in the lead but with no help. Redchevy got caught speeding on pit lane and had to serve a drive through penalty. Bernie, Bob, and Bruce passed the 80 car and the race was on. In an effort to help, Chuck backed off and allowed the leaders to catch him so he could help Q. At two to go, he would pull up high and with Poreboy and Redchevy pushing, move to the lead. Poreboy backed off forcing ECT Q to dive down in front of the B&B Racing duo. On the final lap the B’s would hang Q out to dry putting Bernie back in the lead. McClure had laid back and had a run on the leaders but Phalin missed his signal to drop down in time for Chuck to push him to the win. Bernie Mobbs would top off the night by rolling the new #19 Subway Dodge Dart into victory lane. -ECT-Q would finish second and the out of fuel #80 would finish a distant third. Chuck McClure would leave Tally still in the points lead but only by one point as Mobbs gained every possible point. Next week we’re back at “The Beach” so hope to see ya’ll there.