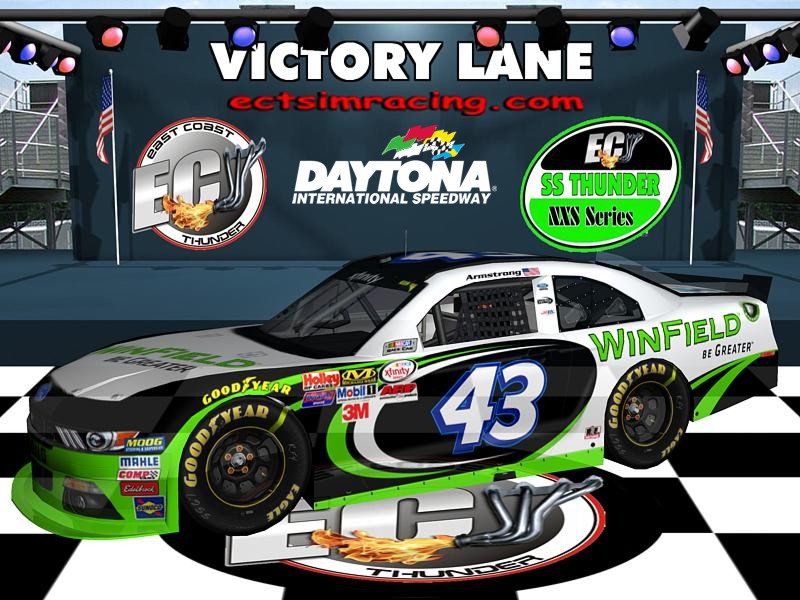 The SS Thunder cars rolled out for the last time in Season 13 under the lights at Daytona. Bernie Mobbs spent the entire week in Florida to prevent any problems getting to start the race. The green flag flew and Bernie was crowned Season 13 Champion, congratulations !! With that out of the way, the race became an all or nothing event After the halfway green flag stops the pack was broken in two with 1st thru 4th in a five car draft with a lapper and 5th thru7th with only three. The leaders would slowly pull away leaving them to hope for a caution. With under twenty to go, final green flag stops would definitely impact the finish. First in were the three car pack who pitted safely and came back out together. Next up the leaders. In front was Swat who locked up his brakes and spun collecting up Chris in the process. This would scatter the rest. Taking a half can less of fuel, DMAR would be out first with tail-ender Diesel in front of him. Next out would be the duo of Marc Paglia and Chris Taylor. Last and alone would be Mike Scott. The three car pack of Mobbs, Blevin and Phalin ran down and passed Scott. After picking up lapped driver Bob D, they set their sights on 2nd and 3rd. With three to go, Bernie was in second leading a six car pack and running down the leader. But time and fuel mileage were on Martin’s side and he won his first race of the season placing him in tenth overall in the points. Bernie Mobbs followed by Poreboy filled out the top three. We’re off next week while we work on next season’s schedule. I want to thank everyone for all the fun this season, I needed it and you all provided it. Hope to swap paint with you next season.
Q