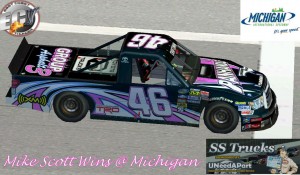 The Bad Boys in the Trucks took on the High Banks @ Michigan Internatonal Speedway. Wayne Quackenbush grabbed the pole with a lap of 196.266 mph. As the green flag flew and the battle was on, as everyone scrambled for track position. After an early caution on lap 5, the field would settle in and we would see green flag pit stops.  Pole sitter Quackenbush would have his night end early as he was involved with Chuck McClure towards the end. Pete Sindone also had troubles late but would bounce back for a respectable run of 6th.  A late race yellow flag would seal the deal for Mike Scott(#46), as he would lead 42 of the 75 laps. Jerry Hayman in the #5 would end up with a strong run in 2nd, 3rd went to Bud Boykin in the #55, Lee Helmer had a great run in 4th in the #011 and Sam Spigelmeyer would  end up 5th in his #007 machine.